The LGBT Ministry of the Episcopal Diocese of Newark

About the Oasis Ministry

The OASIS is a part of our response as a community of faith to our own baptismal vows:

``To seek Christ in all persons and respect the dignity of every human being.``

The OASIS is a part of our response as a community of faith to our own baptismal vows:

“To seek Christ in all persons and respect the dignity of every human being.”

It is designed to make honest the universality of the publicly stated invitation: “The Episcopal Church Welcomes You.” The Oasis is charged with the task of fighting the prejudice that diminishes the humanity of a single child of God. It is created and designed to raise the consciousness of the whole church so that the life-giving love of God may be seen as embracing all that God has created.

We have so much to learn about the mystery of human sexuality. The long and oppressive history of homophobia still exerts its killing power on us all. Public role models of gay and lesbian people, living whole and beautiful lives, need to be held up before the church and the world.”

The OASIS was founded in 1989 at All Saints Church in Hoboken, N.J., in the context of a very different church and society. At that time the concept of churches being welcoming places for lesbian, gay, bisexual and transgender people was more vision than reality. The Right Rev. John Shelby Spong, then the Episcopal Bishop of the Diocese of Newark, sought to create a “safe space” for gay men and lesbians to worship together and find community. The Rev. Robert Williams — an openly gay partnered priest — was named as the organization’s first director. In its original form, The OASIS provided monthly worship services at four locations around the Diocese, each with its own convener.
As some background about the general attitude of the church at that time, a year after The OASIS was formed, the Right Rev. Walter Righter, who was then serving as an assistant to Bishop Spong, was charged with heresy for ordaining a man known to be gay, Barry Stopfel, as a deacon. These charges would not be dropped until 1996. In the meantime, the General Convention of 1991 affirmed that “physical sexual expression is only appropriate for married heterosexuals”

In Newark, however, the understanding of homosexuality in a Christian context was beginning to evolve. By 1991, two years after its founding, The OASIS was enjoying the support of 18 congregations, nearly 1/5 of the churches in the Newark diocese. In 1996, The Rev. Elizabeth Kaeton was installed as Canon Missioner to the OASIS. Beginning in 1997 we offered the required training for laity who wished to become Eucharistic Ministers.

In addition to providing regular worship for those who did not feel comfortable or safe in a mainstream church setting, The OASIS organized a wide variety of social, educational and advocacy opportunties. For example, in 1995, we sponsored a gala evening with Barbara Cook at the John Harmes Center in Englewood, N.J.

By this time the wider church was beginning to look at our community with more compassion. In 1994, 88 bishops signed a “Statement of Koinonia” affirming support for gay and lesbian clergy. The Standing Commission on Human Affairs issued a study on homosexuality in the church which urged compassion for Christians who “find themselves to be gay.” However, the Lambeth Conference, made up of the presiding bishops of all the provinces in the Anglican Communion, issued its own statement in 1998 calling homosexuality “contrary to the teachings of the church” indicating that attitudes in the rest of the communion were not evolving at the same pace.

The beating and subsequent death of Matthew Shepard, a young gay Episcopalian man in Wyoming in 1998, captured the world’s attention and caused many to re-examine their own feelings about homosexuality. Presiding Bishop Frank Griswold issued a powerful statement condemning Shepherd’s murder, and memorial services were held at Trinity & St. Phillip’s Cathedral (sponsored by The OASIS), the Cathedral Church of St. John the Divine in NYC, and congregations across the country. Bishop Griswold’s statement was seen as a call to action to many in the church, who felt such violence and hatred could not and must not be seen as “Christian”.

In 2000, Bishop Spong retired and was suceeded by the Right Rev. John P. Croneberger. Under Bishop Croneberger’s direction, the leadership of The OASIS was transformed from an elected board format to an appointed commission, under the umbrella of the diocesan Justice Ministries. Fifty congregations, nearly half of the churches in the diocese, were then sponsoring our work.

The needs of gay and lesbian people within our diocese were changing. Many of our congregations were becoming safe and welcoming, and the need for a separate worship community was no longer as relevant to many. As such, we shifted our focus to occasional services focusing on various themes that resonated with our community. These included:

Celebration of committed relationships on or near St. Valentine’s Day
Uplifting of persons in 12-step recovery programs at a “Serenity Mass”
Celebrating the life of The Rev. Pauli Murray, a writer and civil rights advocate who in 1977 became the first black female priest in the Episcopal Church
Celebrating families with same-sex parents
Thanksgiving services
All Souls services for victims of violence
National Coming Out Day
World AIDS Day
We also partnered with various faith and secular groups to provide a connection between the church and the wider world. We participated in interfaith services with P-FLAG, the organization for the parents and friends of gay and lesbian youth. When Sakia Gunn, a teenager who identified as an “agressive” (a subset of the lesbian population), was murdered in Newark, we took part in a justice rally and a memorial service for LGBT violence victims with the Liberation in Truth Unity Fellowship, a LGBT-majority congregation that is resident in our Cathedral, the first of several events we would share.

Social events continued to be part of our ministry, providing opportunities for our constituency to make new friends outside of bars. For several years beginning in 2003, we hosted monthly “Coffeehouse Socials” in a Montclair restaurant. We also have an ongoing relationship with the Nutley Little Theatre, and have been the beneficiaries of their “non-profit night” for at least one production each season since 2001.

In 2003, the Episcopal Church grabbed headlines when Gene Robinson, a partnered gay man, was elected Bishop of New Hampshire and ratified by General Convention. This action triggered a two-way tide: some people and congregations threatened or subsequently did leave the church, while other people expressed support and praise for this progressive step and sought out our churches as a refuge from the increasingly polarizing rhetoric heard from other pulpits. The Episcopal Church found itself under pressure when the Archbishop of Canterbury issued a document called the Windsor Report, which asked the Episcopal Church to justify its decision and refrain from further such ordinations until such time as the wider communion could agree. The leaders of Anglican churches in South America, western Africa and the Middle East condemned the election as “un-orthodox” and heretical, and subsequently efforts began to push the Anglican Communion towards a more hierarchical decision-making structure where such unilateral actions were not permitted. Meanwhile the provinces in Scotland, Canada, and New Zealand resisted such a change as “un-Anglican” and are evolving on LGBT isses at their own pace. After agreeing not to consecrate any more gay or lesbian bishops at its 2006 meeting, the General Convention reversed itself in 2009 and the following year Mary Glasspool, a partnered lesbian, was elected Suffragan Bishop of Los Angeles.

Although our focus was purely on the needs of gay men and lesbians at the time of our creation, The OASIS has made significant efforts to widen its ministry to bisexual and transgender people and promote understanding and welcome within the church. In 2005 we offered possibly the first-ever religious retreat specifically for transgender people, led by the Rev. Dr. Erin Swenson, believed to be the first person to undergo gender transition while in an active clergy role. Erin had previously presented a workshop at Diocesan Convention that was well-attended, indicating an openness on the part of the diocese to understand and extend welcome to an often maligned population. The OASIS and Trans Episcopal have been co-sponsors of numerous justice-related resolutions to Diocesan and General Conventions.

In 2007, Bishop Croneberger retired and was succeded by the Right Rev. Mark Beckwith. Bishop Beckwith has continued the tradition of his predecessors by being a strong voice for justice on behalf of LGBT persons. He campaigned along with other clergy in favor of marriage equality in New Jersey, and serves on the Chicago Consultation, a group of Episcopal and Anglican bishops, clergy and lay people, that supports the full inclusion of gay, lesbian, bisexual and transgender Christians in the Episcopal Church and the worldwide Anglican Communion. He also commissioned a task force of clergy and laity within the Diocese (including OASIS Missioner John Simonelli)to study the effects of and consider our response to the institution of civil unions for same-sex couples in New Jersey in 2007. As part of its work, the Civil Unions Task Force produced services for the blessing of such unions in both English and Spanish. 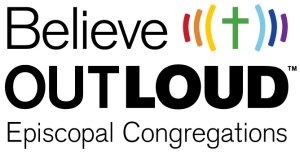 Under Bishop Beckwith, The OASIS has returned to a more autonomous structure. By our 20th anniversary in 2009, it was evident that it was again time to re-examine our role, lest we become a victim of our own success. As more and more congregations have become welcoming and the Internet has afforded new opportunities for socializing and networking, the demand for LGBT-specific worship services and social events has diminished. We have entered somewhat of a “wintering season” to explore what our future ministry will look like.

Believe Out Loud logoIn the meantime, we have entered some new partnerships to ensure that our witness to the church and the world continues. Since 2009 we have jointly managed the Episcopal presence at area Pride events with our peer organization, the LGBT Concerns Committee of the Diocese of New York, as well as the new NYC-Metro Chapter of Integrity, the national organization of LGBT Episcopalians. We are also participating — along with Integrity and the other OASIS diocesan ministries across the country — in Believe Out Loud, an ecumenical campaign to identify, support and promote LGBT-welcoming congregations, known within our church as Believe Out Loud Episcopal Congregations. Fourteen Christian denominations are part of this effort. We are working with Episcopal Response to AIDS in its efforts to fund grants for parish ministries related to HIV/AIDS. We will continue to seek new ways to utilize God’s many gifts to us, to evolve our church into one where all are truly welcome and included.

In addition, there are OASIS ministries in the dioceses of California (San Francisco area), Michigan, Missouri (St. Louis area), New Jersey (southern two-thirds of the state) and Rochester, N.Y.